“I’m happy to say that my experience working with David and his crew was great. They are very professional, artistic, cost-effective, and completed in a timely manner. David listened to my request and he and his crew worked hard to make it happen, making changes as necessary for a better end result. Thank you so much for making this such an easy project for me.” – Pam Race 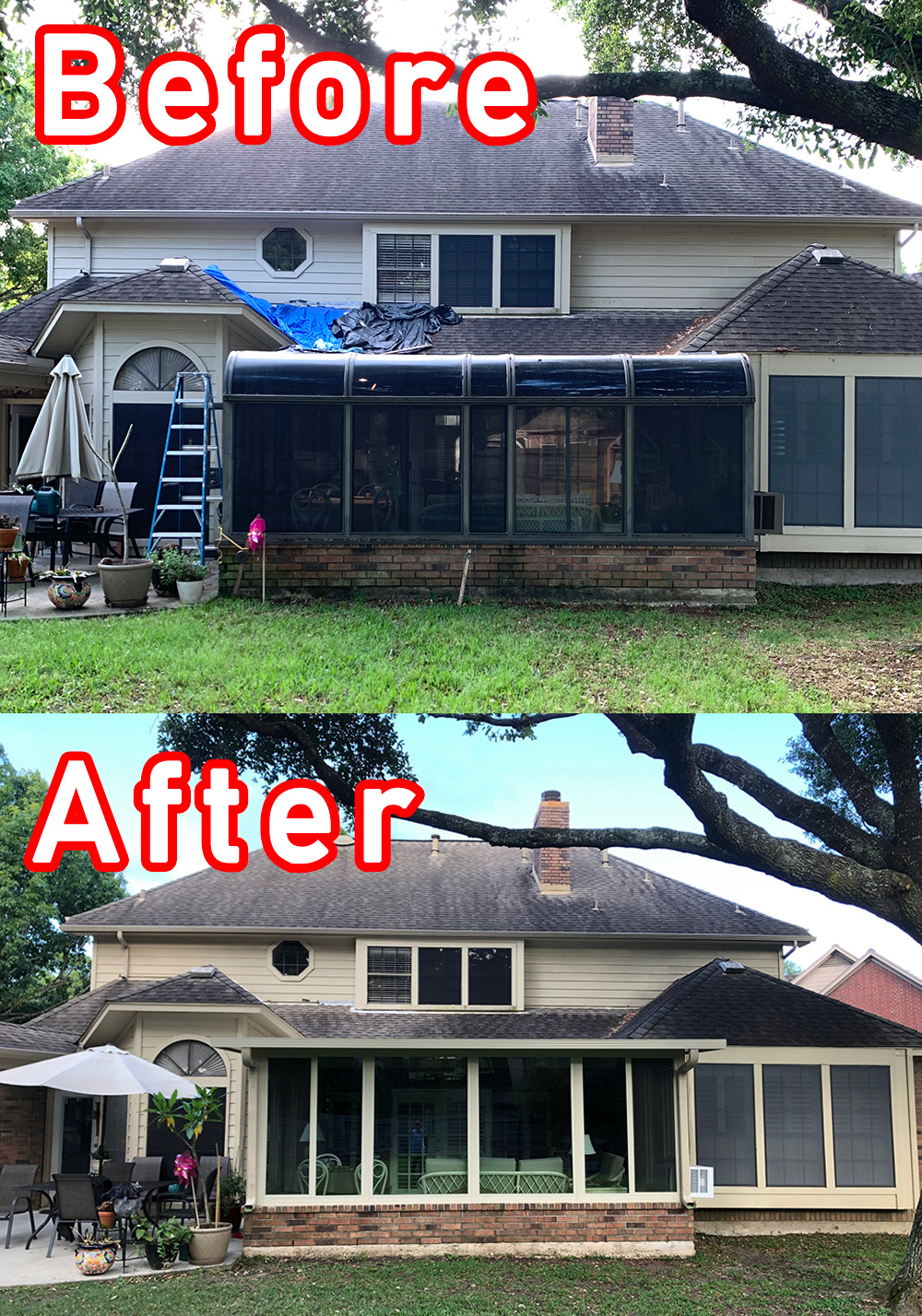 “We hired McBride Construction to replace an old sunroom installed 27 years ago. The sunroom was experiencing small leaks which were nearly impossible to locate. At first, we considered having the old sunroom replaced with a traditional roof and enclosed structure built with studs, drywall, windows, and exterior siding. David McBride proposed using a prefabricated structure similar to the first installation. The roof and structure were provided by a company called Town and Country and the windows were Simonton both which are represented by McBride Construction. This proposed installation was significantly more economical and faster to install than a site build project.

David and his crew were very professional and reliable. The cost of installation was per the original proposal with no change orders. The demolition of the old structure was completed in one day and all debris was removed the next day. The construction went per plan and any remaining materials after the job were promptly taken off-site. The quality of the materials was much better than the materials used in the original sunroom and the insulation was much better due to the sunroom materials and the double-paned, argon-filled windows. The old air conditioning unit was also replaced with a quieter, more efficient unit. The quality of the installation was also exceptional. The workers were very courteous and efficient. The job site was cleaned up at the end of each day.

We were highly pleased with the end result and wish we would have done this job sooner. We highly recommend McBride Construction for any new or replacement patio or sunroom project. They truly did an outstanding job and we have no complaints.” – Vic and Melanie Lovuola (Clear Lake, TX)

“McBride Construction was recommended by a friend and I am so glad I listened. David was great and helped me achieve the look and materials that I wanted. All of the contractors were professional and went out of their way to ensure my happiness with the project. ” – Karen McCorkle

“We have recently finished a large project in our house, a new sun room. It was a big, complex undertaking which involved the demolition of an existing pergola, removing the paving, pouring concrete for an almost 400 sqft room, building the structure, roofing, sheet-rocking, installing the thermal windows, the stone floor, the lights, the AC/heating, and painting. All that, including the entire interaction with the city of Nassau Bay, was masterfully handled by our general contractor, David McBride. McBride Construction did a truly great job at a reasonable price. The pictures speak for themselves. It turned out to be the loveliest and happiest room in the house.” – Greg Khasin

“David’s crew just finished our patio and Porte Cachere last week and we are beyond happy! They finished in a reasonable time and exceeded my expectations! Very nice group to work with and communicated with us throughout the project. Highly recommend them!” – Melanie Smith

“I am highly satisfied with the patio cover completed by McBride construction.   From start to Finish, Mr. McBride always kept me up to date on what was happening, he was very responsive to my every question and concern, and I will undoubtedly recommend him for your next project.

His crew and contractors are some of the most hard-working and efficient people you can see, they all come in an orderly manner and on time on the day that Mr. McBride has scheduled.  They arrive at the front door to announce themselves and go about their job and make sure that they do not call it a day until all construction material/debris/tools are removed and the place is left organized and cleaned for the next crew to continue.

I am very satisfied with the quality of materials used and the level of detail given to every aspect of the project, from the pouring of the foundation all the way to the roofing. Now my family can finally enjoy the back patio again!   Thank you once again for such an amazing job, I am certainly very pleased and will have no hesitation to recommend you to friends and neighbors visiting. Regards,” – Juan S. Suarez

“A few months ago my wife and I decided that we would like to extend the covered area in our backyard to give us more usable space outdoors. We had a couple of ideas for the space in mind so we started calling around and meeting with different companies and getting quotes. We met with several contractors and were more impressed with some than others. Immediately what stood out to us about McBride Construction was the deep knowledge and professionalism of David. He was able to clearly articulate the process, timeline, and expectations. He told us which of our ideas would work and which would not based on his many years of experience. McBride Construction just finished our backyard project last week and it is phenomenal. We have already gotten several compliments on the craftsmanship of the patio cover, stone base columns and firepit. Throughout the entire process, David was always available to take my call and answer all of my questions. Even after the project had begun and we asked for changes to be made David was very easy to work with and helped our dream become reality. My wife and I could not be more appreciative of the work they have done and we would highly recommend McBride Construction to anyone looking for an honest and trustworthy contractor.” – A. Garcia in Pearland

David McBride and his crew were very professional, very qualified and very efficient. The patio cover structure he built is beautiful and very sturdy. Even the inspectors said this company does a fantastic job. After the structure was completed and we had a couple of minor problems, David fixed them right away. I would recommend his company to anyone whether your project is large or small.  – Becky L. Pasadena 2/4/19

“David and his crew installed a beautiful custom patio in my backyard. He was very attentive to the details and always answered everyone of my calls and msgs. His crew when started, worked pretty quickly but without overlooking any details. His costs were also reasonable after taking several quotes from other highly rated contractors.” – Javed Mahommad, Friendswood

“Excellent product and workmanship. David produced the designs, worked with the HOA, took care of the permitting. The end results is a fantastic looking patio. Our design was created to tie together and gable, across the rear of the house to connect to our detached garage. Now we have a fully shaded zone where once it was just unbearable summer sun. The construction was delayed during the whole procession many times by weather. The crew made certain everything was sealed up to prevent problems with leaking water. I couldn’t be happier with the new patio cover!”- William Anders

“My wife and I hired McBride construction to build our backyard oasis. There were many options out there, we are so glad that we chose McBride construction. David and his crew did an amazing job and we could not be happier. They were professional and courteous and finished the job quickly. The addition looks like it has always been a part of our home. David was there from the original sketches to the final product, answering all of our questions and calming our fears… (we’ve had recent bad experiences with contractors). I would highly recommend McBride Construction to anyone looking to add to their home.” Thank you David and crew!! – Brandon and Marissa Garcia

“We recently moved to Brookwood in Clear Lake.  Before making the move, a requirement of mine was a patio.  Well, the home we purchased did not have one.  I called McBride Construction which was the best move I have made in years.  David McBride came out and plans were approved.  My biggest concern was that it would look like an “add-on.”  They had to deal with a very weird roofline.  I had been told by numerous individuals that it would be near to impossible.  Well, McBride Construction apparently performed a miracle.  The results are far more than I ever expected.  All the crews (carpenters, electrician, roofers, painters) were not only professionals but perfectionists.  This company needs to consider home building!!!!  Congrats to McBride Construction.” – Vic Keasler

“David and his guys put a new pergola in for me last week and I am very happy with the results. David worked with me on special requests for the materials and talked me through multiple options, producing a couple of quotes for me to compare. Once we agreed on the work, I had some concerns about my existing deck and gutters, but David’s design and his team’s execution were top-notch – not a scratch on either. When the pergola was completed, David Let me know that the final cost would actually be lower than the quote! Overall I am very happy with our new back patio – it’s well-constructed, looks great, was within budget, and went up fast. Thanks David!” – C.S. In Clear Lake

“David, thank you so much for our beautiful, well-built patio. The attention to detail displayed by your team I was truly appreciated. They took all my wishes into consideration and the outcome far exceeded our expectations.  We are already enjoying it daily and look forward to many gatherings outdoors.” – Roberta N. in Richmond

“We had a fireplace tear out and sliding door and sun-room built by McBride Construction in late January through early February of 2018. David (owner) gave us a very clear and fair contract for the job to be done. The payment schedule was clearly laid out and were very reasonable for the job we had done. David’s crews were polite and friendly, and worked hard on their jobs. Julio (one of the lead crew) listened to our requests about little details as we went along, and always followed through with what we wanted. The new sliding door and sun-room look wonderful! The tiling was well done, and we are pleased with the final product. We look forward to many years of enjoyment in our new room.” – Robinson Family

“McBride Construction did a great job on our backyard patio build. David was readily available to answer any questions I had and his crew worked daily until it was complete unlike some contractors that work 1 day and take off 3. Thank you David for a great patio that my family will enjoy for years to come.” – Chris A. Friendswood

“The finished product was stellar. I did not know exactly what I wanted, and McBride designed a beautiful patio cover. He employs excellent tradesmen. The carpentry work was excellent as were the roofers, painters, and electrician. The concrete guy helped us come up with a plan for our existing patio slab and did an awesome job that really tied everything together. We are truly enjoying our patio!”  -Grace S.  SE Houston

“I hired McBride Patio Construction to install a wood-framed patio cover on the back of my house.  They came up with a design and a very reasonable quote to build this patio cover which was quite complicated.  They removed a post from my breezeway and installed a big 24′ long beam which really opened up the space and made my wife really happy.   The stained pine tongue and groove ceiling is just beautiful and everyone who visits the house just loves it.  Thank you David and crew for a job well done!  -W. Webb in Clear Lake

Do You Have A Construction Project We Can Help With?

Get a free quote
Go to Top